James Boswell’s ‘Life of Johnson’: An Edition of the Original Manuscript in Four Volumes, Volume 3, 1776–1780

James Boswell’s ‘Life of Johnson’: An Edition of the Original Manuscript in Four Volumes, Volume 3, 1776–1780 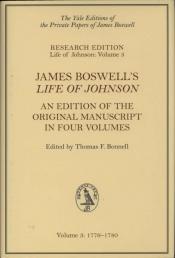 This volume is the third in the Yale Boswell Editions’ manuscript edition of the Life of Johnson, a four-volume sequence designed as a research supplement to the Hill-Powell version of the Life. The first volume, edited by Marshall Waingrow and covering the years 1709–1765, appeared in 1994, and the second volume, edited by Bruce Redford and Elizabeth Goldring and covering the years 1766–76, appeared in 1998. In this volume, for the years 1776–1780, Thomas F. Bonnell continues the genetic transcription of Boswell’s heavily revised manuscript—a master narrative into which Boswell keyed scores of satellite ‘Papers Apart’ and other documents—in the system devised by Waingrow for the series. The text picks up at the point at which Boswell and Johnson return to London after a Spring jaunt in 1766 to the English Midlands, and follows Johnson through the years during which he began, labored on, and published the first several volumes of the greatest work of his later career, the Prefaces, Biographical and Critical, to The Works of the English Poets (reprinted as The Lives of the Most Eminent English Poets). Bonnell’s transcription tracks the many and various changes made in manuscript, proof, revises, and successive published editions; identifies (and for the first time in many instances definitively corrects) compositorial and other misreadings and errors that have long remained undetected; and restores a revealing array of deleted and lost material.

Thomas F. Bonnell is Professor of English at Saint Mary’s College, Notre Dame, Indiana and the author of The Most Disreputable Trade: Publishing the Classics of English Poetry 1765–1810 (Oxford: Oxford University Press, 2008). He is editing the fourth and final volume of this Life of Johnson manuscript edition.

Thomas F. Bonnell’s edition [of] the manuscript of Boswell’s Life of Johnson … follows the majestic trail set by his predecessor editors Marshall Waingraw and Bruce Redford (with the assistance of Elizabeth Goldring). Bonnell’s contribution fully justifies his commission; he upholds and extends the rigorous, demanding standards established by his eminent precursors.… [T]his is a book pocketed with fascinating excursions and brilliant aperçus; the patient reader willing to burrow into its depths will strike many rich veins …

Our own ability to understand Boswell’s artistry is promoted by volume three of the manuscript of Boswell’s Life of Johnson, the latest installment of the “Research Edition” of the Boswell Papers.… The long-expected volume, edited by Thomas Bonnell, meets the high standards set by its predecessors, and promises to encourage more attention to Johnson, to Boswell, and to all the complexities of their long relationship….

Simply recovering the early drafts of the Life is a Herculean labor, not for lack of material but for its abundance. In one sense we are fortunate: very few works of such high literary profile survive in multiple drafts, including several manuscript stages and printed revises.… The result is great complexity: with all these readings juxtaposed on the page, the explosion of unfamiliar sigla, insertions, deletions, variants, and footnotes can be overwhelming. Making sense of it is worth the effort, however, because it reveals how a major work of Scottish literature came into being.