James Boswell’s ‘Life of Johnson’: An Edition of the Original Manuscript in Four Volumes; Volume 1: 1709–1765

James Boswell’s ‘Life of Johnson’: An Edition of the Original Manuscript in Four Volumes; Volume 1: 1709–1765 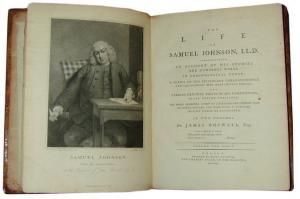 This Research Edition covers the first volume of what is probably the world’s most famous biography—by a biographer as famous as his subject. It covers Johnson’s early years and work on the Dictionary, Boswell’s meeting with him in London and the foundations of their friendship. A research companion to the Hill-Powell version of the Life, this edition corrects errors of various kinds, including a number of wrong identifications of anonymous people—and also makes new identifications for the first time.

The manuscript of Boswell’s Life of Johnson is a composite of his basic draft and many bouts of revision, the whole—despite its intricate annotations—having served as printer’s copy. Marshall Waingrow has succeeded in making this complex manuscript accessible to the reader by means of a specially-designed text supplemented by an apparatus of footnotes and endnotes. Together, these enable the reader to trace all the substantive changes made in the process of composition, including additions, deletions, substitutions, and reorderings. Boswell’s queries, memoranda, and instructions to the compositor are reported in footnotes; same-draft changes and changes made in the course of printing are reported in endnotes. Particular attention has been paid to Boswell’s sources as being an essential part of the process of his composition; wherever the sources (whether in manuscript or in print) have been identified, they are fully documented in the footnotes.

Marshall Waingrow’s remarkable new research edition of the Life, which follows on from his earlier edition of Boswell’s correspondence in connection with the Life, allows us to unpick as never before this writer’s use and exploitation of language. The original manuscript, as Waingrow writes, was a “concatenation of segments,” more than one thousand frequently altered pages, plus additional material which sometimes the printer absorbed, and sometimes not. This edition shows us the permutations, the sections inserted and left out, the alternative version (often versions) of particular sentences, the choice of words Boswell agonized over, the sources of his information. There are hundred of learned notes on the text, and notes on Boswell’s own notes. But it is ‘the process of the composition’ that is almost exclusively concentrated on in this volume …

The first volume of a projected four-volume edition of the manuscript of the Life … is an astonishing piece of work. Not only because of its rare scholarship, but because of the view it gives, in microscopic detail, of Boswell at work.

The original manuscript, which marvelously survives to this day, consists of more than a thousand pages of Boswell’s handwriting, together with a similar number containing additional matter. He crossed bits out, introduced new thoughts, toned down some expressions and heightened others. One feels a pang of sympathy for the printer faced with these congested pages. All these variations are recorded, at who knows what cost in scholarly toil, in this handsome volume. The evolution of the book is laid bare.

Marshall Waingrow’s opus magnum is not a corrected edition of the printed text of Boswell’s Life of Johnson. Rather, Waingrow presents an edition of the manuscript which enables us to follow Boswell’s compositional process through successive revisions. This concretely means that the editor has deciphered Boswell’s manuscript text (a tortuous concatenation of additions, variations, selections, drafts, marginal notes, and those “Papers Apart”), determined the order in which every alteration was introduced, and presented all this complex information in all illuminating fashion.… Now for the first time the reader can observe Boswell struggling to “improve” language, to become master of his medium. We see him trying out Johnson’s words—experimenting with variants to achieve the most characteristic register; we watch him writing around a problem when he does not fully understand his material; and catch him in the act of hiding his source (his clandestine transcript of a priceless diary Johnson later destroyed). We become the privileged witnesses of the artist in his studio.

Some general observations hardly do justice to a volume everywhere defined through meticulous detail, though they may orient readers to the terrain of Waingrow’s work. If ideally in the making of a book, a manuscript moves to print with no more than the usual frustrations, Boswell’s Life suggests a radically different reality—a wrenching of literary cosmos out of chaos. Boswell imposed horrendous conditions on his printer, asking him to decipher a manuscript laced with revisions at the same time he had to incorporate shards of additional material—excerpts from books and magazines, original letters and copies, and Johnsoniana from contributors. While Boswell physically attended the composition of his book, neither he nor Edmond Malone read the proof sheets against the manuscript. While this and other oversights did not make the printed life a literary equivalent of Magritte’s famous pipe (the printed Life is still the life), Waingrow’s printing of the manuscript of the Life will reorient readers to the work in ways not seen since the appearance of the Hill-Powell edition. He accomplishes this through an editing tour de force as he successfully superimposes on the familiar printed text the manuscript of the Life. One is able to read for the first time, then, the point-counterpoint of manuscript and text: the printed version of the Life shaped some years ago by Hill-Powell is simultaneously enriched by the manuscript, and both are consistently defined by the virtuoso notes and appendices provided by Waingrow.… Even more important perhaps, the volume will encourage a review of Boswell’s literary artistry, apologists for the latter finding abundant evidence that in sifting through universe of material defining Samuel Johnson, his biographer tried consistently to satisfy the dam ends of literary form as well as of biographical content.… Waingrow has conclusively added his name to Boswell’s finest editors and has set a standard by which future ones will be measured.