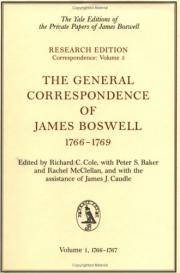 This is the second and final volume of James Boswell’s general correspondence for the years 1766 to 1769. The richly diverse collection includes the texts of letters between Boswell and 123 correspondents, beginning when Boswell was in the early years of his legal career in Edinburgh and closing shortly after his marriage to his penniless Ayrshire cousin, Margaret Montgomerie. The volume includes a comprehensive analytical index to both volumes of Boswell’s general correspondence between 1766 and 1769.

The correspondence touches on many topics and issues, some public, some private, including Boswell’s patronage of an obscure struggling playwright and poet, William Julius Mickle; the publication and reception of Boswell’s highly successful Account of Corsica and his efforts to rouse British interest in the Corsican cause; and the aftermath of Boswell’s vigorous legal and journalistic involvement in the Douglas Cause. Letters to and from his European correspondents carry echoes of Boswell’s recently completed Grand Tour and the closing moments of his epistolary affair with the francophone Dutch author, Belle de Zuylen (Zélide).

This is a full-bore scholarly edition, preserving original spelling and supplying an extraordinary wealth of editorial commentary. A two-page letter from the Scottish poet William Mickle, for example, generates one and a-half times its length in additional editorial explanations.  JB’s correspondents include Guiseppe Baretti, Charles Claude, Robert and two John Boswells, Charles Dibdin, Charles and Edward Dilly, David Hume, Lord Lyttelton, Pasquale Paoli, Thomas Sheridan, Tobias Smollett, Hester Thrale, Horace Walpole and “that Devil” John Wilkes. On one single day, 14 March 1768, for example, JB wrote a soothing letter to the prickly Smollett in order to head off a bad reaction to JB’s correction of Smollet’s mistakes in the latter’s Tour through France and Italy, and also received an interrogatory letter from Arthur Young pleading for help on matters to do with rural economy, following on from Young’s Six Weeks’ Tour through the Southern Countries of England and Wales.

The extraordinary value of these scholarly editions, of course, is not only in the accuracy of their texts, but also in the comprehensive manner of their editorial commentary.

Boswell is of special interest to us because he was interested in everything around him (including Johnson, of course), and it is fascinating to see that JB’s own contemporaries seemed to have regarded him as an expert witness. These exemplary Yale editions are not meant for the general reader, but anyone who owns them has ready access to information about almost every body and every thing in the period.”

Clive Probyn, The Southern Johnsonian: Newsletter of the Johnson Society of Australia, August 1998