Editors: Richard C. Cole, with Peter S. Baker and Rachel McClellan, and with the assistance of James J. Caudle 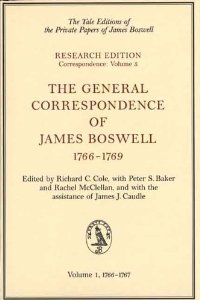 The major events in Boswell’s life during the years 1766–1769 are his involvement with Corsica and the Corsicans’ heroic fight for independence, culminating in the publication of his Account of Corsica in 1768; his becoming an advocate and his first law causes; an his search for a wife. Among Boswell’s correspondents in these two general correspondence volumes are William Pitt the Elder; George Keith, the 10th and last Earl of Marischal of Scotland; Jean-Jacques Rousseau; Belle de Zuylen, the Dutch intellectual (later famous as the novelist, Mme de Charrière); Edward and Charles Dilly, publishers; and the engraver Robert Strange. Here also are letters to and from tradesmen, farmers, and even felons. Historians will find a vast array of subjects illuminated: eighteenth-century politics, religion, land ownership, high and low life, domestic life, crime, law, agriculture, theatre, gender, and philosophy.

The correspondence in this volume sheds light in particular on Britain’s relations with the continent, India, and North America.  It also illuminates the literary tastes of the time, and offers rare glimpses into the world of publishing and bookselling.

For the Boswell specialist and the researcher of the 18th century, this addition to available resources is—as has been said many times of the whole Boswell publication enterprise—indispensable.

[S]ome of the major figures of the eighteenth century represented here [include]: Jean-Jacques Rousseau, Catherine Macaulay, John Wilkes, William Pitt the Elder, James Oglethorpe, as well as some important figures in Boswell’s personal life.… The letters throw up a variety of subjects, and true to the editorial intention of making the research edition “turn outwards from the text,” the annotation does indeed relate the letters to a vast array of different aspects of eighteenth-century life: politics, religion, the law, landownership and the orders of society, agriculture, medicine, and literature.

The scope of the bibliography has been extended so that it now covers not just works relating to Boswell and the attendant criticism and reviews, but memoirs, parodies, whimsical sketches, and items culled from contemporary newspapers and magazines.  This last section, though focused upon one person, provides a fascinating glimpse of the variety of eighteenth-century life from Boswell’s song on gifts being sent to the Emperor of China to a letter claiming that Boswell was the famous stone-eater in a circus performance.

Dr. Samuel Johnson is recorded, admittedly by Boswell himself, as saying: “Mr Boswell never was in anybody’s company who did not wish to see him again.”  There is plenty of supporting evidence in this collection of letters both to and from, but mostly to, Boswell, from February 1766 to December 1767.… [T]hese letters are the stuff of real life and you are left with a feeling of immersion in the 18th century.

The interest of these letters—intrinsic, as well as in regard to the history and culture of the age they reflect, and in regard to the light they cast on Boswell himself—scarcely need to be stated.  As with all the volumes in this series, the critical apparatus is exemplary; all letters are reproduced in the original languages (translated when in Italian), the notes are copious and precise, and the editors have been scrupulous in preparing the volume for scholarly use.”

Approximately three-quarters of the letters surveying from 1766–67 which are printed in this volume are written to, not by, Boswell himself.… In terms of the intrinsic interest of their writing, the stars of this volume are the good-humored Sir Alexander Dick of Prestonfield, the genial old Jacobite, George Keith, last Earl Marischal of Scotland who accompanied Boswell on his Continental tour, Girolama Piccolomini who was Boswell’s lover in Siena in 1756, and Samuel Johnson’s friends Giuseppe Baretti and Tom Davies the bookseller.

The merits of a miscellaneous collection of letters like this are obvious. It provides a multi-dimensional view both of Boswell himself and of the affairs, public and private, which preoccupy him and his correspondents from week to week.… Two public events which figure largely are the Corsican crisis and the famous lawsuit over the Douglas inheritance. The Corsican episode played a significant role in Boswell’s life and made him briefly a literary celebrity.

The editing and printing of this volume appears impeccable. The introduction provides a concise and helpful background to the major concerns of the letters in this period and illuminating sketches of some of the leading correspondents. The editors hope that the General Correspondence “will be read with pleasure as well as for information”: judging by this first sample, their hope is well founded.