The General Correspondence of James Boswell, 1757–1763

The General Correspondence of James Boswell, 1757–1763 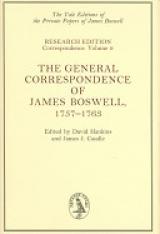 This volume, ninth in the Research Series of correspondence in the Yale Boswell Editions, assembles the bulk of the surviving letters between the young Boswell and his circle of friends and acquaintances in a period crucial to his personal and authorial development, up to the time he wrote his now famous journal in London in 1762–63. Opening with an exchange—rooted in his rebellious adolescent fascination with the Edinburgh theatre—with the gentleman-actor West Digges, it closes with letters written in July 1763 near the end of his second visit to London (the one in which he first met Samuel Johnson), a short time before his reluctant departure for legal study in Utrecht. The volume features centrally the correspondence between Boswell and his friend and literary collaborator Andrew Erskine (1740–93), a poet/soldier of the kind the young Boswell briefly aspired to be. Their surviving letters, printed here alongside the revised versions in the facetious Letters between the Honourable Andrew Erskine, and James Boswell, Esq., Boswell’s first book-length publication, and the first to bear his name, offer revealingly early evidence of the kinds of selective self-revision Boswell would employ in his later writings and perfect in the Life of Johnson (1791).

Overall, these letters document Boswell’s fluid experiments in selfhood as he ponders his life’s future possible trajectories—as soldier, lawyer, wit, author, bon-vivant, Scots laird, or M.P.—and records, and tests against other sensibilities, his fascination with the unfolding drama of his existence. James J. Caudle’s introduction situates this drama in the historical contexts which it mirrors and illuminates, following Boswell from his post-Culloden Edinburgh boyhood to his capitulation to his formidable father’s vision for him (to follow him as a Scots laird and lawyer) soon after the brief and embattled premiership of the Earl of Bute brings a vexed and controversial end to the Seven Years’ War. Some thirty-five correspondents are represented in more than 150 letters and other documents (such as verse-epistles), comprehensively annotated to the long-established standards of the Yale Boswell Editions.

David Hankins (1936–2005) was Associate Professor of English, Emeritus, at the University of Connecticut at Storrs.

This is volume IX of the research edition of Boswell’s Correspondence (General Editor, Gordon Turnbull), and with it the Yale Boswell Editions project continues to exemplify literary scholarship at its most rigorous and generous …

Boswell has been thoroughly well served by his editors, not least in the attention given to the letters he received. As is often the case with correspondences, the tone and content of the letters to him can tell us a great deal; we discover what his friends think will interest him, and what they feel they can tell him or ask him. It makes one long to read an equivalent complete correspondence of Johnson, Coleridge, or Byron …

But the glory in this edition lies less in the correspondents’ own voices than in the many others that surround them. The headnotes and copious footnotes are full of rich, loamy matter. The editors ruefully admit to having been drawn into a kind of Scriblerian game, their “painstaking labors … constantly being spoofed by the subjects whose writings they hope to explicate.” But they take up this challenge with unabashed enthusiasm. From the opening pages, with their brilliant piecing together of the draft of a verse epistle to Laurence Sterne, a Shandean spirit presides. The following nine double-column pages of notes not only offer a full discussion of the links between Boswell and Sterne, but tell us a lot about each man and many details of the London they both delighted in.…

The volume’s annotation, as the editors right express it, “turns outward from the text,” and the result is a treasure trove of materials that catch the spirit and texture of mid-eighteenth century London and Edinburgh.

James Boswell … is a particularly elusive individual, the very frankness in his writing concealing his socio-political allegiances. The rich collection of correspondence in this new volume of Boswell’s early letters, which includes letters both to and from Boswell, provides us with ample material to evaluate the gap between Boswell’s private and public self in the very moment when he was developing his public voice.… The editors of this volume good-humoredly acknowledge that Boswell would have ribbed them over the extensive annotative material, yet for modern scholars the volume provides a remarkable range of fascinating and valuable information ranging from the number of sedan chairs in Edinburgh in the 1770s to information on the history of the Edinburgh town guard to an extensive description of the way in which the tension between Moderates and Evangelicals in the Church of Scotland relates to the conflict between Bute and John Wilkes. Those who approach Boswell for the first time have ample information to position him in his socio-cultural context, and Boswell scholars will find a rich body of scholarly resources to assist with their own research.

Sharon Alker, Studies in Hogg and his World, 2008

With more than 150 letters and other items, among them verse epistles such as the one to Sterne at the height of “Shandymania,” the volume offers most of Boswell’s earliest known correspondence, sent and received, and opens a window on a crucial phase of his early personal and literary development.  It follows him from his late teenage years in Edinburgh to his second visit to London in 1762–3, which saw his momentous and life-defining meeting with Johnson.…

The editing of this volume, annotated to the famously exacting standards of the Yale series, points up the multi-generational continuity of this long-running and vast scholarly undertaking.