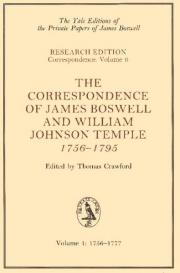 This is the first of two volumes collecting letters of James Boswell and his most intimate friend, William Johnson Temple (1739–1796), clergyman and essayist (and the ancestor of two Archbishops of Canterbury). During his time as rector ofthe tiny parish of Mamhead in Devon, Temple—though often dejected, in financial distress, and with a large family—remained ambitious to write, publish, and keep in touch with literary and intellectual currents. He relied heavily on his frequent letters to and from Boswell. The friends shared their most intimate thoughts and kept up a series of debates—frequently on opposite sides of major questions—on many of the later eighteenth-century’s most enduring political, social and doctrinal controversies.

The edition offers, in the 125 letters to Temple and 338 from him, what Thomas Crawford terms a “vivid and comprehensive picture of literary, professional, domestic, and intellectual life over  a period of almost forty years,” as well as a portrait of an intricate lifelong friendship. In 1909 Virginia Woolf, anonymously reviewing and edition of 97 letters from Boswell to Temple, noted that Boswell helped himself out to depression by “remembering that worthy men like Temple cared for him,” and that Temple himself “reflected the image of what Boswell would like to be.” Had the full correspondence been available to her, writes Thomas Crawford, Woolf might have sensed Temple’s “parallel imaginings”: in Boswell’s crowded, erratic, and busy life temple found vicarious gratification of his won “ambitious amorous, questing” drives of which neither his personality nor his circumstances could allow full expression. Volume1 ends with Temple at last on the brink of a brighter life, having just been presented to the more lucrative living of St. Gluvias in Cornwall. Ten letters by Temple’s wife, Anne (Stow) Temple, appear in an Appendix.

[T]he value of the Temple correspondence for the Scottish historian is very real, if perhaps of a slightly less obvious nature.  It arises in the curious nature of an enduring friendship which produced, between 1756 and 1795 (the present volume includes the material only up to 1777), fully 463 letters not only of considerable intrinsic charm but also of outstanding personal, intellectual, social and political interest. For the correspondence reveals, more surely than any artfully constructed and carefully re-drawn autobiography, the society in which Boswell and other Scottish men of letters lived and worked and wrote. It shows the intimate responses which his circumstances elicited from Boswell and the events and concerns which affected, stimulated and provoked him as a private individual. This it does because William Johnson Temple was not merely Boswell’s confidant and confessor (“my Priest,” as the Scot once revealingly wrote); he was more specifically, in a sense which both men evidently understood, his alter ego, a man in whom Boswell discovered what Thomas Crawford describes as his own “virtues and his image of what he would have liked to be.”

The intellectual and production values of this edition are, it needs to be said, of the highest order. [This research edition] has been designed with institutional purchasers and specialist scholars chiefly in mind. For their £50, however, buyers will not get just a handsomely presented volume; they will receive a monument to vast and scrupulous erudition: here are the footnotes (74, for example, to the 23 July 1764 letter by Boswell) which will guide even the most demanding scholarly reader through the extensive network of each writer’s friends, associates, contacts and contemporaries, as well as his reading, influences, preoccupations and peculiarities. The very depth of the scholarship underlying Thomas Crawford’s editorial contribution provokes awe and gratitude in equal quantities: where else might one find each allusion and every reference, once a living part of eightenth‑century life but long since rendered impenetrable obscure, so patiently unpacked, meticulously dissected and clearly explained? There should, then, be no doubt that the Boswell‑Temple correspondence presented by Yale is literally definitive. It will define standards for Boswelliana which will take some matching. But it also serves as a luminous example of the qualities to which all scholarly enterprises of this kind ought to aspire.

Temple proves to be a figure of considerable interest for anyone concerned with the intellectual atmosphere of Britain in the latter half of the eighteenth century—certainly more interesting than the rather pathetic querulous character that appeared in the diaries published by Lewis Bettany in 1929. Previously published material has related mainly to Temple in his later years, when he was becoming increasingly disappointed in his hopes of making a mark in the literary world or in the church. The present edition shows the animated young man, a natural companion for an equally animated Boswell.… These letters are not only of interest to the historian of ideas, but illustrate the workings of the cult of sensibility, of Rousseauesque frankness, in the unexpected setting of a country rectory.

These letters range across almost every aspect of the personal, social, intellectual, religious, and amatory lives of the two correspondents.  All of eighteenth-century life is here, and every detail is elucidated and explained by Tom Crawford’s exemplary scholarship.

The letters recount an absorbing tale, a human drama replete with a full measure of both tragedy and success for each of the correspondents.… As Crawford notes in his introduction, the letters are absorbing not only for their vivid depiction of two fascinating personalities, but for their inclusion of a whole cast of background dramatis personae—a variety of heroes and villains—mentioned by Boswell and Temple and fleshed out in their descriptions until they approach the stature of “ ‘characters’ in an imaginative work.’”  Too, the letters impart a poignantly human dimension to the celebrated literary figure Boswell ultimately became.  Temple’s delicate sensibility—his depressions, his languors—forms a sharp contrast to Boswell’s exuberance of body and spirits, his sheer energy, whether it expressed itself in visits to prostitutes or in forming new literary schemes or in vigorously busying himself as a Scottish advocate.

[This volume’s] annotation is extremely thorough (roughly two pages of notes for every three pages of letter). Crawford calls attention to telling changes either man made as he wrote the letters. He illuminates references, and gives readers suggestive glimpses into the world these men inhabited, by sketching the careers and ideas of numerous figures who appear in the letters, and by explaining such things as how students dined at Trininty Hall Cambridge, the physical layout of Temple’s hometown of Berwick, the history of inoculation, the boarding schools available in Edinburgh in 1773. He expands the drama with quotes from Boswell’s journal and Temple’s diary, and from the correspondence each man had with others. He gives detailed answers to questions raised explicitly or implicitly in the letters, such as what was “the best edition of Dio Cassius” and how quickly Anne Temple recovered from the birth of Francis on 28 July 1770. He glosses obscure allusions, like Boswell’s reference to “Celia who at Berwick deigns to dwell.”  He also tells when detailed searching left him without a clear answer.…

[T]his collection is of major significance.  We get key insights into Boswell, and a rich view of Temple’s life and character. We also get glimpses of Gray, Hume, Johnson, and others, and overhear how two interested readers responded to new works by Ferguson, Smith, and Gibbon. I was most interested in this correspondence as a poignant, suggestive record of a long-term friendship sustained almost entirely through letters.… This volume will richly reward virtually anyone interested in the eighteenth century, or in the dynamics of friendship.”

This book is a major edition to our literature. It is described by its editor as a “record of fascinating friendship between two very different men.” That it certainly is, but it is also a very vivid picture of life in both Scotland and England in the 18th century. Boswell’s talents as an uninhibited reporter of the society around him are familiar, but his friend, William Temple, also has a sharp eye and an honest pen.

The quality of the editing, and in particular of the annotation, is exemplary. In writings such as personal letters there will inevitably be a high incidence of allusion to ephemeral or merely private events, which will test the powers of the editor. These letters have been annotated with unusual fulness, and yet it is remarkable how seldom Crawford has been driven to a confessional “untraced.”  In part this is due to his great familiarity with the whole mass of Boswell holdings at the Beinecke … [b]ut Crawford’s annotation is also remarkable for the extent of its reach into eighteenth-century culture more generally. Time and again a note throws fascinating sidelights on to the English and even European culture of the mid-eighteenth century. As it is generally the case with the best editions, the self-effacing learning of the editor is rich in hints capable of pollinating the research of others.”